Taking a critical look at things that happen in our world today... main targets being:

a.) Crimes on children and the way that villains and victims are being treated
b.) Religious intolerance

So we have trouble again, hey? A few words from the Pope inlcuding an unfortunately chosen quote from the middle ages and there is all Hell let loose again in the Islamic World.

The Pope is, as the premier representative of the catholic faith, a diplomat who should be careful what he says, knowing that the muslim world is ready to pounce on his every mistake. The Pope must have known, or at least one would expect him to know, that this particular sentence must be misundertood and taken out of its context. As one commentator put it in this mornings press; why on earth cant thePope use simple language that we all understand? Why must he be so cryptic? For the message he is trying to tell us is that there is no room for violence and hatred either in the christian or the islamic faith. That is what he said, but by just publishing the one sentence alone, which of course the terror fraction of this world are only ready to do, then of course you arrive to a different conclusion. Als the question must be asked whether it was a good idea to quote a byzantine Emperor of all people, as they date bacl to a time when the christian religion wanst exactly peaceful either, and all byzantine Emperors were conquerors anyway.

On the ther hand, whereas "moderate" muslim leaders, who should know better, have jumped to conclusions and condemned what the Pope has said, they must live with the accusation that they havent listened. In fact one prominent muslim representative has freely admitted that he did not hear the speech at all, he only read about it. This reflects of course the readiness of the islamic world to pounce on every mistake. We're used to that from the unruly mobs of course, but it must be said that for the most part they are people living in poor countries and are for the most part uneducated. A lot of them live in squalor and lead unhappy lives. It is then maybe only natural that they turn to their Gods for guidance. You can well imagine then how easy it is for muslim fundamentalists to whisper wicked things in their ears...

Do you know what I really miss though? It's the normal muslim not standing up to protest about the way his religion is being misused..

Depictions of a prophet

So, we have the case of the press making cartoons of the prophet Mohammad, making fun of him and depicting him as a terrorist. Now this was originally published months ago in a Danish rag and went largely unnoticed until certain Europeans newspapers decided to assert heir divine right to say whatever they want and insult millions of muslims. One does wonder what the point in the exercise was….

Certainly this may be conceived even in moderate islam circles as being an uncalled for  provocation , I don’t think these people can say they didn’t know that it is forbidden to depict the premier muslim prophet, and that there is a perfectly good reason for this…. (a reason by the way that we Christians should be able to relate to … remember the golden bull?) as we have had these incidents before… And of course this is nectar for the radical fanatics following the Hamas and others.

“Yes, we are allowed to make fun of our God’s “ says one French paper and shows the cartoon that was originally in the Danish paper as well as a new one where God and Buddha say to Allah “Don’t worry, they take the piss out of us too…”. Well you speak for yourself matey! From where do you take the right to speak for other religions and cultures?

Apart from this I remember the outcry from certain Christian circles in the seventies after the release of Monty Python's “The Life of Brian”...  so much for “Yes, we are allowed to make fun of our God’s “

But you know this is more than a philosophical discussion. Have any of these journalists thought about the danger they are putting innocent people in? Already we have had the case of one German citizen being kidnapped (and thankfully being released again) because of this incident, one wonders what might follow in the next few days… And of course, this is doing absolutely nothing to quieten things down in the …

So, what was really the point in these publications? Just to assert the right of the press to freedom of speech? Should I believe that these people are so ignorant? Do we really always have to say everything that one is allowed? Have none of these people heard about  diplomacy or “Live and let live”? Are these people following some obscure divine plan, or was it really only a stupid provocation by a group of “enlightened” asses?

Nora will soon have a criminal record. She is being charged with causing "grievious bodily harm" to a certain Patrick Sch.

What happened?
Nora and her friend attacked (with their bare hands) and slapped Patrick in court after he had just been convicted of the murder of Nora's daughter Angelina.

The district attorney is not forced to press charges, he could let it drop if Nora for example agreed to pay a token sum of money to charity. But he refuses. This much too full of himself person declares "You cant treat justice in this way!"

Even Patricks lawyer is unhappy about the charges, albeit because it might unsettle Patrick, who is in a mental hospital undergoing treatment, where, after being considered "healed" he will be let loose on the public one day to carry on where he let off.

Isnt there something wrong somewhere down the line?

The investigation against a couple who let their 7 year old daughter starve to death has now been concluded and the State Attorney in Hamburg, Germany is charging them with "murder by negligence".

During the investigations the father blamed the mother for not looking after their daughter,  and the mother blamed poor Jessica herself, as she "refused to eat". The obduction told a different story however, as bits of carpet and Jessicas own hair was found in her stomach. She had obviously tried to eat these in her desperate bid to live. At the time of her death, Jessica weighed a mere 20 lbs.

Hopes that justice will be done are sort of diminished by the fact that the penalty ranges from a mere 3 years behind bars to a maximum of 15.

A Child at the Busstop

Funny thing happened a couple of days ago. I set off from home to go to work, and on my way I saw one of my daughters best friends, she is about 9 years old, stood waiting at a bus stop. My first thought was that I could drive her home...

Then it struck me, that this is just what happens when child molesters abduct children and abuse them. Usually the child knows the molester, is therefore caught unawares and climbs into the car without any suspicions at all.

This thought was so unnerving that I continued my drive to work without stopping. But it leaves a nasty taste in my mouth. What have we come to? 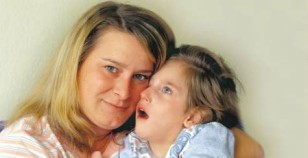 Has nothing been learned by the fate of Terri Schiavi?

Pictured above is Laura with her mother. Laura was born prematurely and with massive brain damage. As a result she cannot walk, sit, speak, she has epilectic fits, and she cannot eat. For this reason she has to be fed intraveniously directly with a tube into the stomach. She is however conscious, not in a coma like Terri was, and, as far as possible under the givewn circumstances, she seems to be a happy girl.

Due to proposed changes in the law, it looks as though the welfare state insurance will in future not be obliged (or allowed) to pay for her food. This will mean that her mother, a single parent, who under the given circumstances obviously cannot work, will in future have to pay a bill of around 400 Euros per month for Lauras food. How this can work is of course unclear.

Whatever happened to humanity? 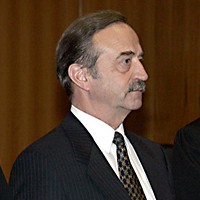 The chap pictured above is called Wolfgang Daschner. He is the vice-chairman of police in Frankfurt.

This man has been fined 10.800 Euros for threatening to torture somebody called Magnus Gäfgen. Who? Magnus Gäfgen is a medicine student who kidnapped the son of a rich man in order to have enough cash to impress his rich girlfriend.

Daschner, upon arresting him, threatened Gäfgen with pain he had never experienced before if he didnt tell him where his victim was. At this point, it was assumed that the 11 year old boy was still alive. In a desperate bid to save his life, Daschner had resorted to this method. In actual fact, though, Gäfgen had killed the lad immediately after kidnapping him.

So, after being convicted and duly sentenced for life, Gäfgen thought it fitting to get his own back on Daschner. The audacity of this criminal is beyond belief! In the opinion of most Germans (in mine as well, although I am no German) Daschner is a hero and should not be punished for his actions in trying to save the life of an innocent boy.

It is being pointed out that Daschner crossed a boundary that should never be crossed, and that Gäfgens human rights were being injured. Strangely these people never mentioned the human rights of an innocent 11 year old boy doomed to die because of Gäfgens greed.

Welcome to the new and improved Sunset Cowboy website. As you can see it is in the form of a weblog. This doesnt mean that I am going to tell you the story of my life, I will not be making entries about what I did today, it does give me the opportunity to keep you informed on everything about oldies though, and I can add items of interest now and again.

When all this is finished there will be a link on the left border leading to the rest of the website. I have a few ideas that arent really realisable on this page, you'll have to be a little patient though

In the meantime I will be adding links to other interesting sites like Ednas playhouse for example, another promising website in the making. In the between time feel free to add your views and comments, the famous guestmap from the diamond stylus website is available from here as well as the forum. also you are able to add comments either to this section, or via the message tag on the bottom left hand side of the page

Bravenet Blog
Get One For Free!
powered by